Now that I have your attention, this is a post with two stories.
Yesterday I was trying to teach my ten year old granddaughter, Julia, to crochet. You should really know how to do whatever it is you're trying to teach someone else. I basically muddle my way through a ball of yarn and end up with a scarf. These are diet scarves. If I keep my hands busy, then I won't be holding food.
Julia has about four rows of her scarf begun. And being that I'm a crappy teacher, her rows are wonkie. I finished my scarf. It was too wide, to short and also wonkie. So I un-crocheted it into a nice ball. Julia was appalled that I was taking the whole thing apart.
I told her that part of the pleasure was in the doing of the thing, and redoing if it wasn't right. 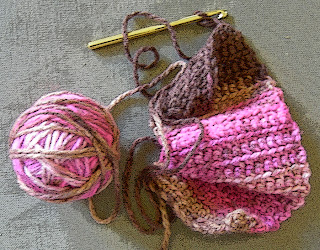 In the wee hours of the morning I had a memory that connects to this.
When I was 27 I took an evening sculpture class from Sergio DeGiusti, who is one of Detroit's best sculptors.  We were using terra-cotta clay and had nude models. By the end of the first class I had a lovely little female figure. That's when Sergio told us to put our creations back in the plastic bags. What? Just squish them up? Most of the class was appalled. But, but, THREE hours were spent on this sculpture.
Sergio told us that these sculptures were not precious. That they were not art.  That they were learning exercises.
One man was very upset. He said that if he went home without any evidence, his wife wouldn't believe he was at a class.
The final night of class, instead of the usual models, an older man was going to pose. I was relieved that we were going to do head studies and he wasn't going to be naked. (Hey, I was 27, what do you want.)
The sculpture class was twelve weeks long and after several weeks Sergio must have thought we were making art. We got to take our sculptures home.
It was traditional that at the end of the final class everyone went out for beer. Somehow or other I ended up being volunteered to take our OLD model to the bar in my car.  So I had his clay head in the backseat and him in the front seat.
Afterward I had to drive the model back to the school. When I stopped the car to let him out, he didn't get out. Instead he grabbed me. What! This old man, that I was being nice to by giving him a ride, grabbed me. I let him know I was not happy in not so nice terms, and booted him out of my car. I drove home, shaking, furious.
The next day that lecherous man's head was sitting on my kitchen table. Now here's the violence part, so take the kids out of the room. I looked at the head of still wet clay. I poked him in the eye. I pulled off his ears and punched him hard in the face. Wham! Pow! Blam! Splat!
The bust was busted.
Here's the take away: everything we make is not precious, sometimes it's learning.  And also it's really fun to punch clay.
Posted by lynn arbor at 9:40 AM