On November 16th I wrote a post titled "The End of the Relationship". It was about leaving Ariana Gallery. The gallery owner rented one of my paintings to the ABC television show, "Detroit 1-8-7". She chose not to share the income from art rentals with the artists who created the work. The 50/50 split went out the window. She kept all of the $600 rental fee from my painting for herself.

I left the gallery.
Now here's the good news. You've heard the phrase "When one door closes another door opens". In December another door opened.
An entrepreneur, who started a business representing artists to Detroit's blooming film industry, added me to her stable of artists. I haven't written about this before at her request. She has all the artists she can handle for the time being.
I'm very lucky to have found an honest, enthusiastic, hard-working, creative woman to promote my work. She's also a painter, so she can relate to artists' struggles.  We've talked about all the excitement in town; one hundred films scheduled to be filmed in Michigan this summer.
In January she rented two of my paintings to "Detroit 1-8-7". They used the paintings on the set. A week later I got paid. Isn't that awesome!
Now the Bad News
Our new governor, Rick Snyder plans to eliminate the tax incentives for the film industry. The governor's reasoning is: why should one industry have more advantages than the others?
Within hours of Snyder's State of the State speech productions that were scheduled to come here this summer left us and headed for Louisiana. "Avengers", a film with one of the biggest budgets to come to Michigan, has pulled out.  The one hundred anticipated films has dwindled drastically.
Michigan is in financial trouble. However, the film industry doesn't cost us, it brings in money.
The governor should be looking at the film industry as tourists. Film making is a vagabond business. They can go anywhere.
They come into town and spend loads of money. They eat out, stay at hotels, shop in our stores. The set designers rent all kinds of things, including fine art from local people. The hotels, restaurants, shops, artists and many many more local people earn income from films.

Then they pay taxes on those earnings to the State of Michigan.
Films also advertise to the world our beautiful, diverse, gritty, lush and serene State. The tax incentives are a bargain for us. Tourism? Who wouldn't want to visit the newest film capitol of the midwest. You might have lunch next to George Clooney or Clint Eastwood.
The Other Good News
The fat lady hasn't sung yet. There's supposed to be a town hall meeting March 3. We have until May for the state legislative vote. Snyder's proposal is not a done deal.
Please, if you want films to be made in Michigan, please call your state representative and the governor. Send emails. Write letters. Share this blog post with your friends and encourage them to call, write and email. Please.
Thank you.

I didn't go to the Detroit Institute of Art or local art galleries when I was a child. They were there, but I had no idea of their existence.
My Brownie Troop went to the Verner Factory. We took a trip to the War Memorial. We rode on the commuter train downtown once. If the troop went to the art museum, I must have had chicken pox and missed the trip.
The art I saw growing up was at the kitchen table. Mom taught me everything she was learning at Cass Tech. Art was more about doing than seeing.
There was never a field trip to an art museum in high school art classes in Ferndale, Palo Alto, Birmingham, and San Mateo (yes, four high schools, two states). We painted, drew, sculpted, made pots. But we never looked at grown up art.
After two kids and six years of military life, my little family came home. I went to Oakland Community College. My ex (before he was an ex) and I took a couple classes together, specifically, art appreciation and film appreciation. We didn't share the Bergman films with our kids, but the art museum was family friendly.
I'll always remember the first time I saw it. The smooth, yet voluptuous, little-headed figure reclining in the center of one of the contemporary galleries, a Henry Moore sculpture. It was love at first sight.
This is "Art" with quotes and a capital A. Art that makes your heart beat. Art that makes you feel all swoonie and alive at the same time.
The wood was polished to a golden, lustrous patina. I wanted to touch it. Run my hands all over it. Of course, if everyone touched it the wood would turn black. The glow would be gone. It would be wrecked.
John likes to touch art. I try not to be in the same space with him at museums, especially if there's a guard nearby.
A few weeks ago Alison took the grandkids to see the Henry Moore sculptures in the Denver Botanical Gardens. I want to share her pictures with you.
I wish we were seeing them live. I wish we could all touch them. 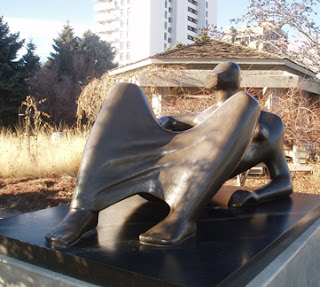 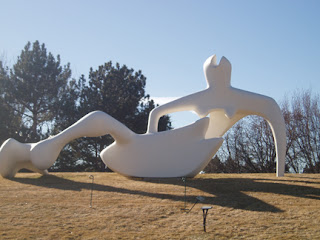 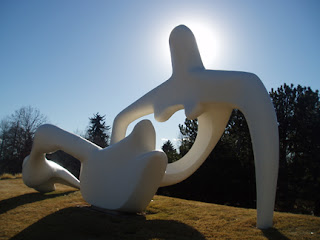 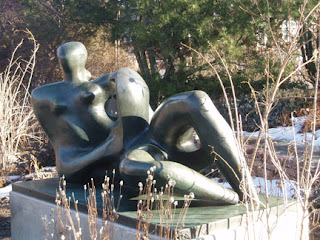 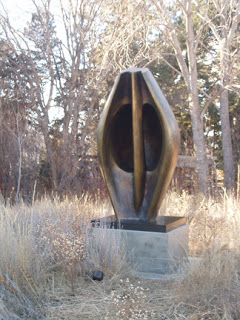