It was pleasant. Something I enjoyed doing. Graphic design with no banking or automotive client to please. Organizing. Quiet. Peaceful. Interesting. Photos and letters were coming in from all over the country: Chicago, Atlanta, Colorado, Arkansas, Texas, Arizona, and Wisconsin.
It was 2008 and I was creating a book for my mother-in-law’s 80th birthday—a book celebrating her life. John’s daughter, Alison, came up with the idea. Alison was busy, so I said I’d put the book together. I used Blurb.com. http://www.blurb.com Their books are very professional. I choose a hard cover version with a glossy dust jacket.
I puzzled over sequence of photos, but finally with John’s help we figured out which pictures came first. Mitzi as a young girl in Austria. Mitzi at seventeen with her young husband. Mitzi with a baby boy (my husband). Mitzi in America with three more sons. Mitzi with her daughters-in-law. Mitzi with her grandchildren and great-grandchildren. Scan photos. Scan love letters from the family. Play around with the design. Hit the upload button. Blip—it’s gone to be printed.
The book turned out great—I mean, really great. We wrapped it in a box meant for a blouse, and took it to the farm in Wisconsin for a weekend family reunion and surprise birthday celebration for my mother-in-law. John bought 22 white t-shirts and ironed-on decals we designed with Mitzi’s picture. On her birthday everyone greeted her wearing her face on their chests. 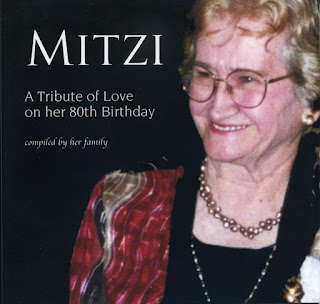 She cried when she opened the book. “I didn’t know I was pretty,” she said. “I didn’t know anyone liked me so much,” she said to us all.
Shocking—one little book, 7” x 7” square, 74 pages long—could make her know, really know, that she was valuable.
In a small Austrian town, where everyone knew everyone, Mitzi’s unwed mother had rejected her very young daughter—just threw her baby girl out on the street like garbage. Mitzi’s father’s parents took her in and raised her. When Mitzi’s crazy mother saw her on the street, she cursed her, screamed at her, and wished her dead. It didn't matter if there were other people around or if she was all alone walking to school. Where do you draw your self-esteem from when your own mother hated you?

The hurt little girl grew up to be a warm and loving mother and grandmother. She had spent 80 years being a good person, despite the hurt core.
Mitzi tells me that I gave her the best gift she ever had. We've become closer since the book. It embarrasses me that compiling the book was simply a nice project for me. I love her. If I had known how the book would have affected her—if I had known the consequences of my actions—I would have done it years before. She should have always known how special she is.

I need someone to talk to. Someone who will truly listen. Someone who will take each word at face value. Someone who will repeat my words back to me, so that I’ll know what I say is what they hear.
Hmm, psychiatrists do that.
Naa, I’m not having a mental issue at the moment.
John hears me. But, sometimes when he hears me, the words he hears are completely different than the ones that came out of my mouth. It makes us laugh.
I have good friends—good listeners. I think so, anyway. I want to be a good listener, but I wonder—am I a good listener? I don’t think so.

Sometimes I drift off—dreaming—picking up tidbits and word scraps thrown on the Piazza like stale bread to feed the pigeons. Sometimes I don’t pay careful attention. Sometimes I’m half or quarter listening because I’m busy figuring out what my response is going to be.
Sometimes my brain is racing ahead guessing what the other person will say next. When my guess is wrong, I miss the end of the speakers thought. I’m lost in the confusion of my faulty guessing. Then I’m embarrassed to ask for a repeat, and when I do ask for a repeat, sometimes I forget to listen to the end. You really can’t ask for two repeats.
I’ve discovered that I can talk to my iPad. On the keyboard there’s a little microphone. This is so exciting. Press the little microphone symbol and it lights up. Talk. Press again when I’m done talking. Typing appears on the screen. Woohoo, I can talk and then check up on my listener.
So here’s what I said to the iPad, “Are iPads good listeners? Or anyway, let’s see, I’d like to know the answer to that.”
Here’s what iPad heard, “Our iPads good listeners or I’m today let’s see I would like to know the answer to that.”
What I’ve learned:
I think I’ll call a friend. I’ll say “Hello,” and then I’ll listen. Really.
Posted by lynn arbor at 12:34 PM 9 comments: